In throwback fashion to days of old, the straight edge youth crew comes to life through the Jizo-Anarcho sculpt. Each one is a unique one off even though some similarities are shared by the crew. Everyone shares the trophy of a pit educed black eye and everyone is X'ed up. Notable differences range from skin tone to blood splatter to hair color to vinyl color. These will be sold blind so your purchase will remain a surprise until you open it. GO...GO...GO grab on in the web shop on Sunday, February 2nd. $30 each. 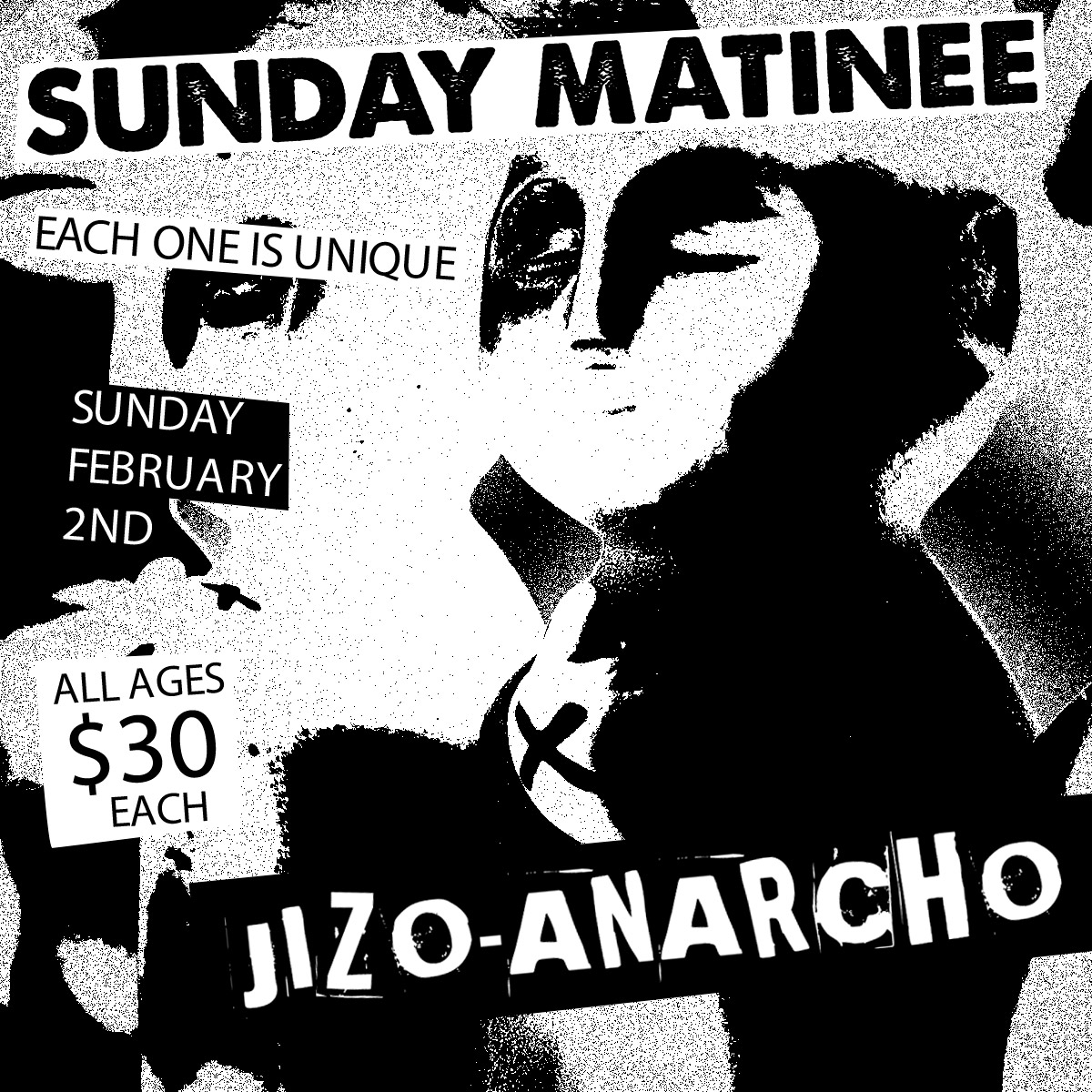 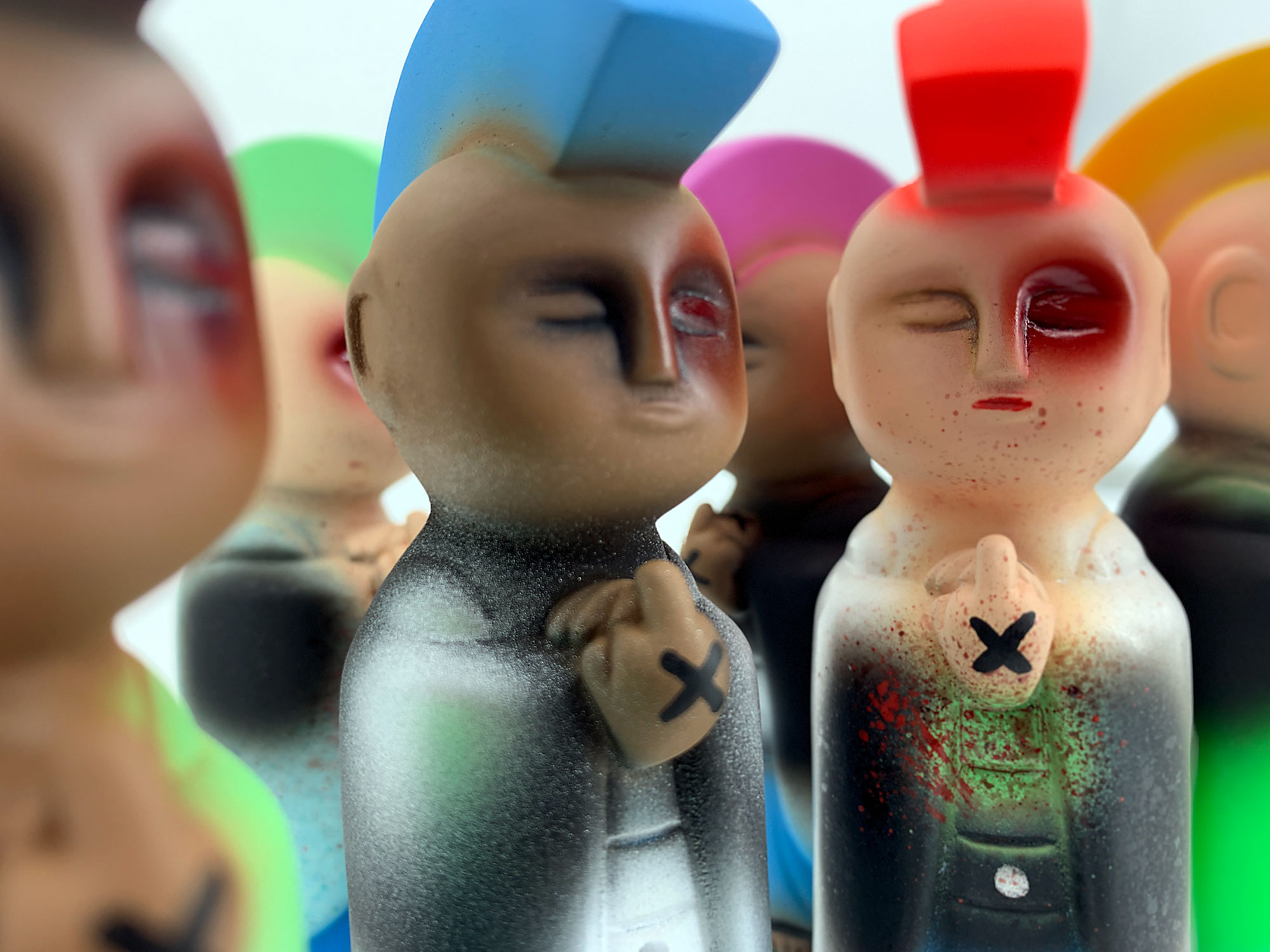 Posted by Devilboy at 9:23 PM No comments:

THE STORY OF MARA

Mara was known as the lord of death. He thrived on suffering and his power grew as he reveled in it. He wove himself into every aspect of human existence by wielding the power to withhold the knowledge of truth. He used violence, deception, manipulation, disguise, and threats. He overwhelmed and consumed people. He used all kinds of deception and lies to undermine stability while causing confusion and fear. Mara symbolizes everything that is ugly in this human world.

One day Mara heard of a young man who was looking to break free from the pain filled existence Mara thrived in. Siddhartha was a seeker of the truth and sought enlightenment through deep meditative practice. Upon hearing this, Mara sought him out with only one objective. Siddhartha must die.

Mara's journey ended with him finding Siddhartha beneath a bodhi tree. Siddhartha was lost deep in thought until Mara screamed with vile breath “It’s time for you to die young Brahman!” Siddhartha opened his eyes to say, “I do not believe it is”, and then gently closed them once more. Mara’s most powerful weapon is sustaining an environment of fear that eats away at the mind of his opponent. Fear can take many forms. Its source can be rooted in anything. From vanity to famine, from plague to war, from greed to terrorism. The more personal the fear, the tighter the knot becomes as Mara tugs on the strings that entwine his victim. In this instance Mara chose to lead with primal violence as a source of fear.

Mara began his attack on Siddhartha with a series of fervent blows and threats. They continued for three days straight. Thunderstorms shook the earth and howling winds drove the rain at a frenzied pace. All the while, without a single word, Siddhartha parried each of Mara’s advances. The only sound he heard was the mantra running through his mind.

Enraged by Siddhartha’s ability to evade and escape all of his vicious taunts and attacks, Mara burst into flames. He transformed in and out of human and nonhuman forms that were both beautiful and grotesque. Suddenly, from the center of the fireball, three beautiful women emerged. They walked toward Siddhartha and began to dance around him as they whispered and sang in his ears. Their hands caressed his body as they swirled around him leaving a beautiful trail of light. Sultry and beautiful words filled the air as they wove themselves together to form blissful songs of sheer joy. Everything went dark around them and it seemed as if nothing else existed beyond these wondrous and beautiful sights and sounds. Again, Siddhartha remained steadfast in his practice. The three women vaporized into trails of smoke that twisted into a black mound that landed in front of Siddhartha.

At the end of the third day, Mara’s tormented howls of anger and frustration faded away only to be heard echoing through its own repulsive head. Its physical form also faded into an apparitional state leaving it a prisoner trapped in a world of sorrow, terror and fear it once reigned over. Slowly, nature spoke once more. The babbling brook began to laugh, and the birds began to beckon other creatures out of hiding. The warm glow of a sunrise kissed Siddhartha's face. He took only a moment to smile and inhale deeply before returning to his practice beneath the bodhi tree. 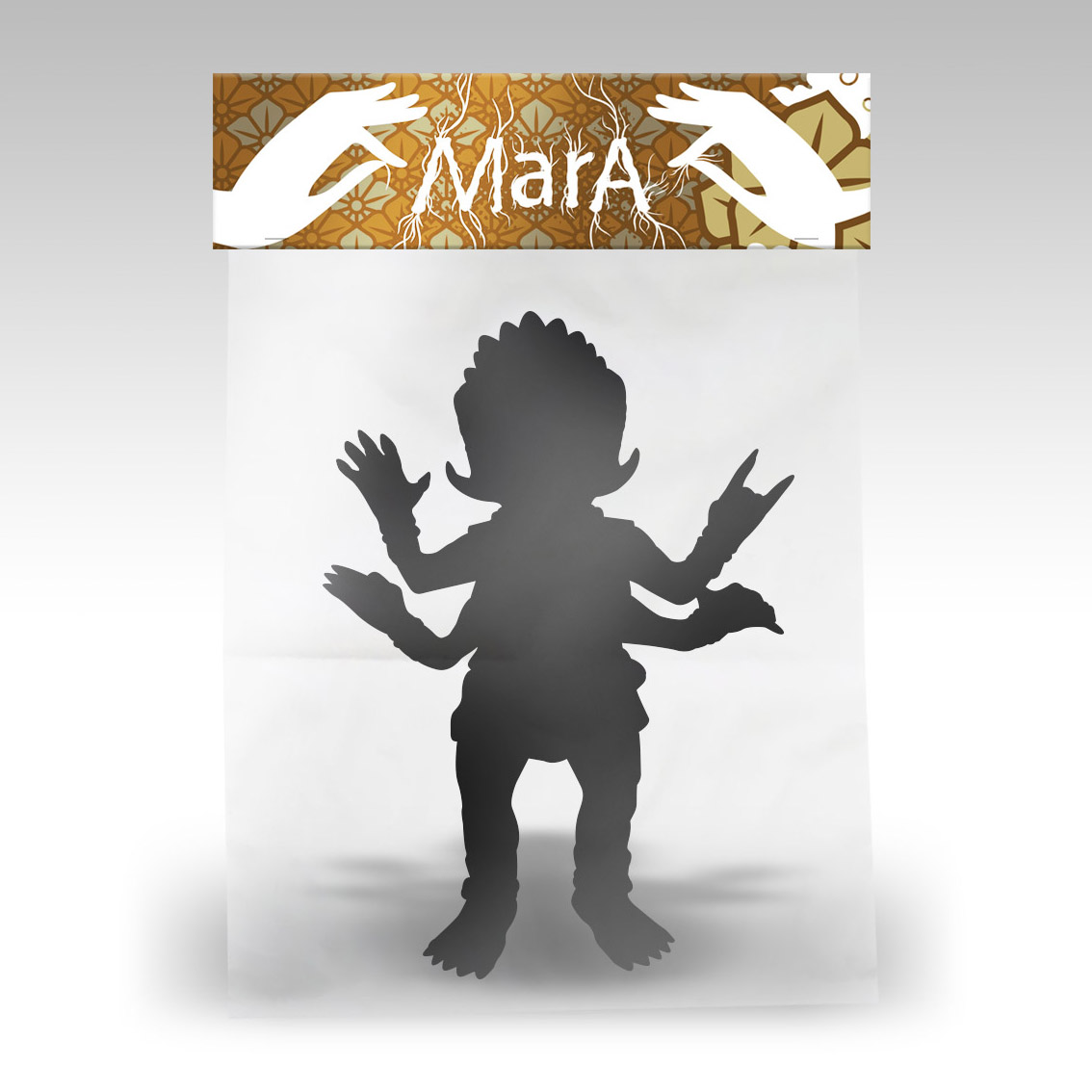 Posted by Devilboy at 1:35 PM No comments:

MADE TO ORDER MARA FIRST RUN

IT'S ALIVE! 3+ years of challenges have finally paid off with the help of Dennis and Shirahama Toy. The molds for Mara are done and it's time to make some toys! Check out the test pull pictures below. The very first run of toys will be MADE TO ORDER done as a SURPRISE EXCLUSIVE COLORWAY. Mara stands at roughly 8 inches tall and has 10 points of articulation. Cost is $100 each plus shipping which depends on your location.

ORDER NOW!
If you would like to take advantage of this offer, email:

You will be invoiced directly and you will need to prepay to secure your order. THE FIRST RUN BUY IN OFFER WILL RUN UNTIL JANUARY 31ST. There is no limit on the number you may purchase. The order will be placed in February and I expect the toys to land in the USA by early spring. 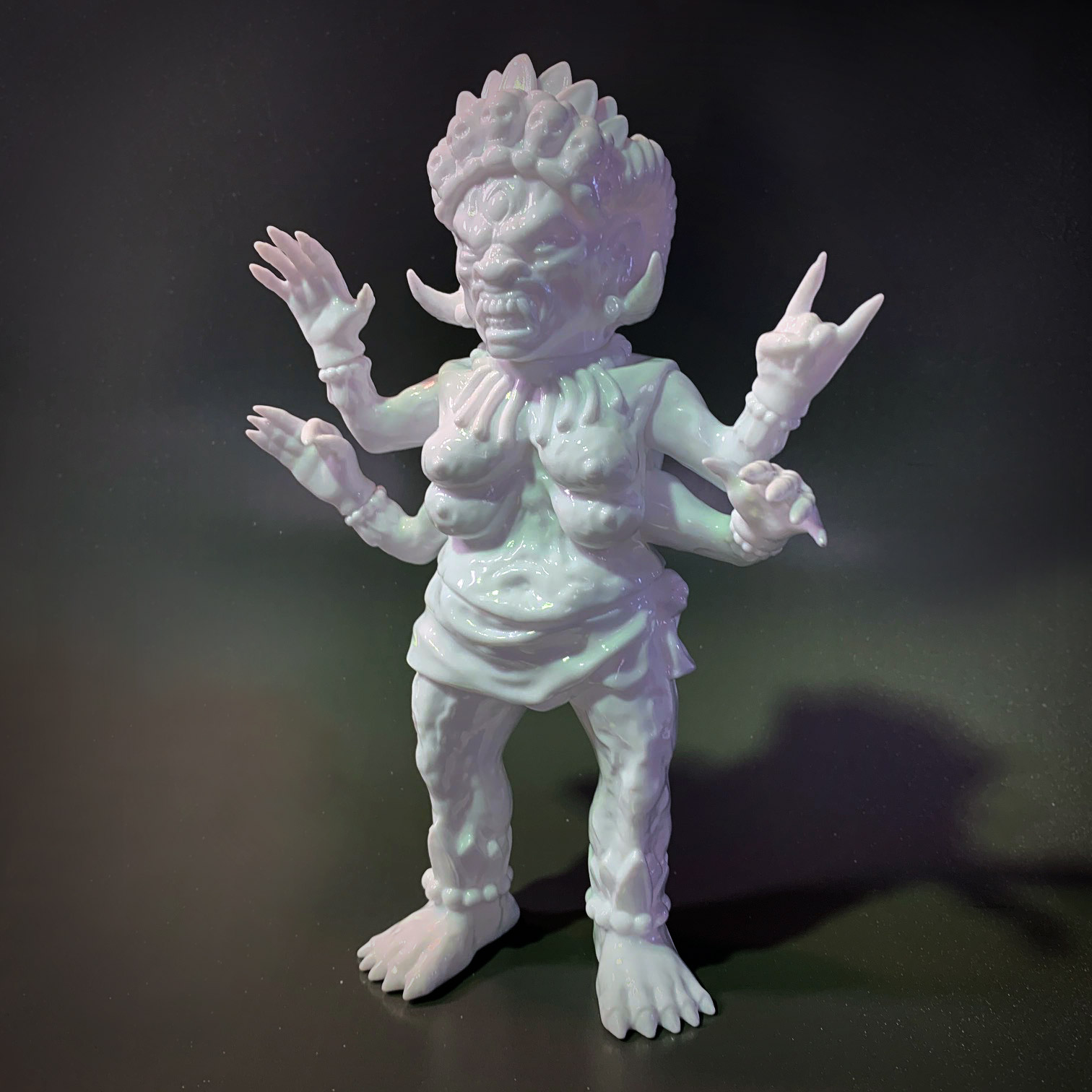 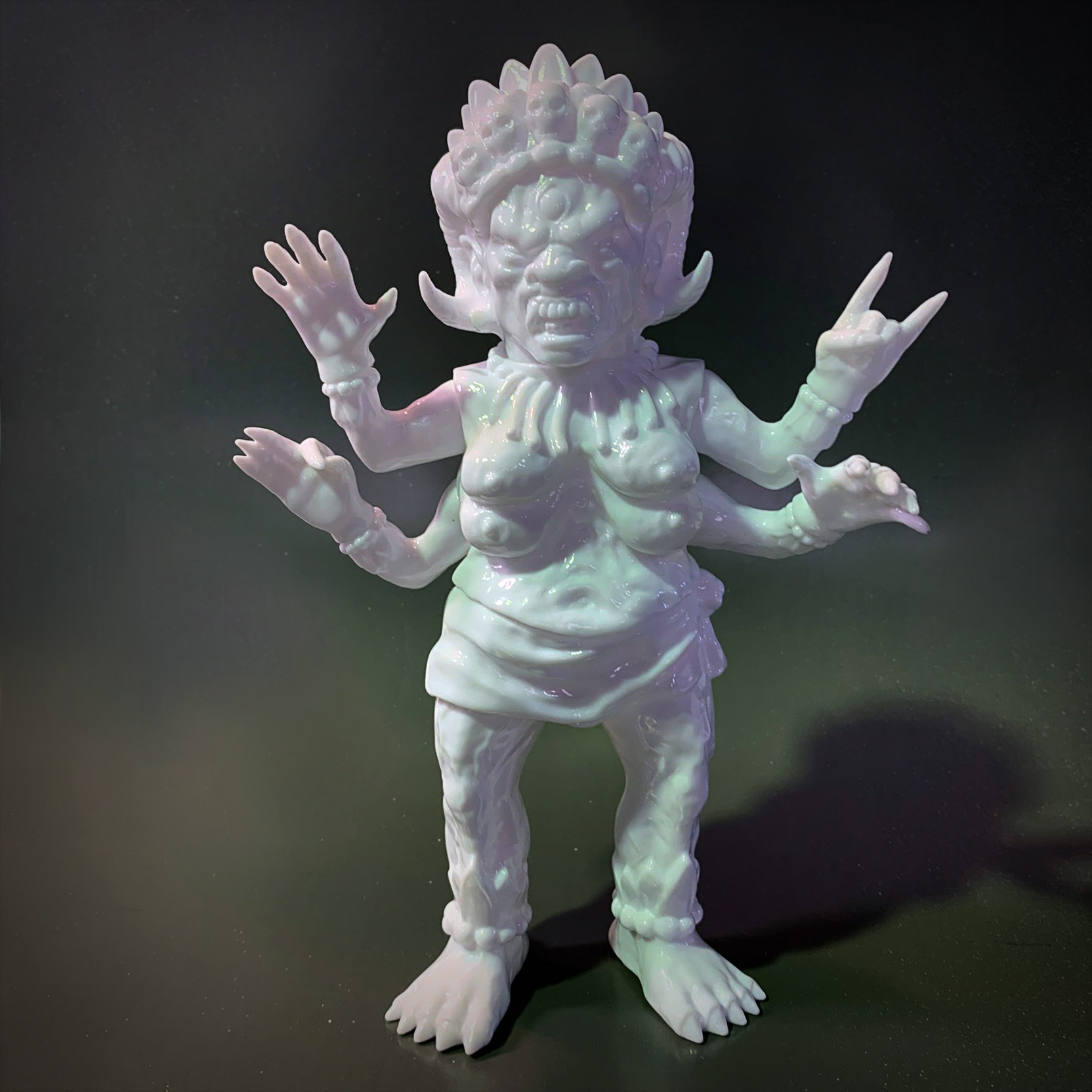 Posted by Devilboy at 8:25 AM No comments: