Find your peace amongst the anarchy. DHP x The Devils Kaiju present the Cosmic Llama. This version of the Jizo-Anarcho sculpt has been done as an homage to Padmasambhava, who some choose to call the "second Buddha". Cast in blue GID vinyl with glitter, gold, red, yellow, black and orange paints have been applied along with some meticulous brushwork. These trippy dudes go on sale @ lulubelltoys.com this Saturday (August 1st) at 9AM PCT. $40 each...made in Japan...painted in the USA. 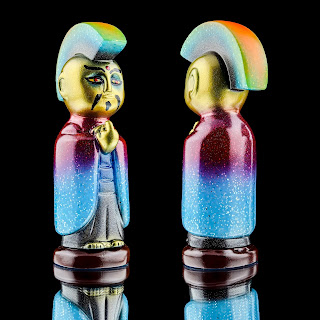 Posted by Devilboy at 7:42 AM No comments:

The mold is DONE and that means the first pulls should be on their way soon. Hoping to have them by the end of August so keep your eyes peeled for your newest favorite hero to fly into your town. 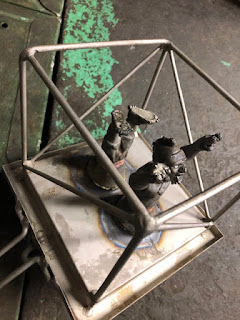 Posted by Devilboy at 6:56 AM No comments:

The day (or in this case the week) has FINALLY arrived! The first official Mara release is here. But there's a catch...it's time to try something different and this release will be a preorder. These toys are a beast to prep with them being 11 pieces total. I thought a preorder would be a fun way to take orders as I trim some vinyl flash and get them ready for a bath before paint. Electric blue vinyl has been infused with glitter and these will be adorned in orange, navy, grey/blue, silver, metallic blue, metallic green and white paints. A killer color combo for it's debut showing. The preorder will be up for ONE WEEK ONLY (July 3rd - July 10th unless they sell out) and I expect them to ship by early August. Price is $100 each. For those of you who love unpainted vinyl...there may be a small amount of the "naked version" available in the shop as well. So this weekend, head on over to devilsheadquarters.com and grab the new hotness! 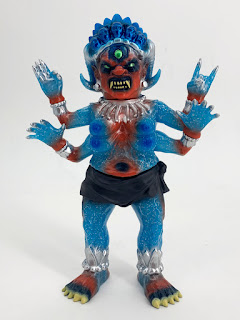 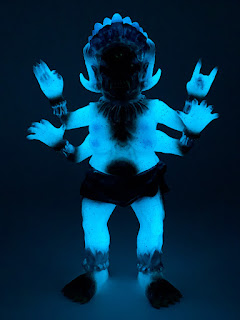 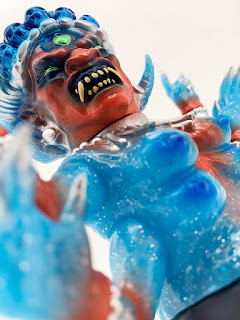 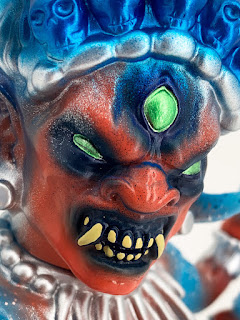 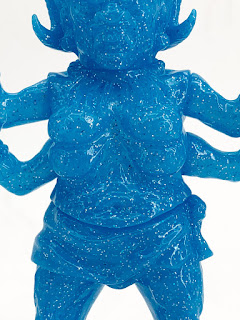 Oh and here's a refresher on the backstory of the character:

Mara was known as the lord of death. He thrived on suffering and his power grew as he reveled in it. He wove himself into every aspect of human existence by wielding the power to withhold the knowledge of truth. He used violence, deception, manipulation, disguise, and threats. He overwhelmed and consumed people. He used all kinds of deception and lies to undermine stability while causing confusion and fear. Mara symbolizes everything that is ugly in this human world.
One day Mara heard of a young man who was looking to break free from the pain filled existence Mara thrived in. Siddhartha was a seeker of the truth and sought enlightenment through deep meditative practice. Upon hearing this, Mara sought him out with only one objective. Siddhartha must die.

Mara’s journey ended with him finding Siddhartha beneath a bodhi tree. Siddhartha was lost deep in thought until Mara screamed with vile breath “It’s time for you to die young brahman!” Siddhartha opened his eyes to say, “I do not believe it is”, and then gently closed them once more. Mara’s most powerful weapon is sustaining an environment of fear that eats away at the mind of his opponent. Fear can take many forms. Its source can be rooted in anything. From vanity to famine, from plague to war, from greed to terrorism. The more personal the fear, the tighter the knot becomes as Mara tugs on the strings that entwine his victim. In this instance Mara chose to lead with primal violence as a source of fear.

Mara began his attack on Siddhartha with a series of fervent blows and threats. They continued for three days straight. Thunderstorms shook the earth and howling winds drove the rain at a frenzied pace. All the while, without a single word, Siddhartha parried each of Mara’s advances. The only sound he heard was the mantra running through his mind.
Enraged by Siddhartha’s ability to evade and escape all of his vicious taunts and attacks, Mara burst into flames. He transformed in and out of human and nonhuman forms that were both beautiful and grotesque. Suddenly, from the center of the fireball, three beautiful women emerged. They walked toward Siddhartha and began to dance around him as they whispered and sang in his ears. Their hands caressed his body as they swirled around him leaving a beautiful trail of light. Sultry and beautiful words filled the air as they wove themselves together to form blissful songs of sheer joy. Everything went dark around them and it seemed as if nothing else existed beyond these wondrous and beautiful sights and sounds. Again, Siddhartha remained steadfast in his practice. The three women vaporized into trails of smoke that twisted into a black mound that landed in front of Siddhartha.

At the end of the third day, Mara’s tormented howls of anger and frustration faded away only to be heard echoing through its own repulsive head. Its physical form also faded into an apparitional state leaving it a prisoner trapped in a world of sorrow, terror and fear it once reigned over. Slowly, nature spoke once more. The babbling brook began to laugh, and the birds began to beckon other creatures out of hiding. The warm glow of a sunrise kissed Siddhartha’s face. He took only a moment to smile and inhale deeply before returning to his practice beneath the bodhi tree.
Posted by Devilboy at 9:05 PM No comments: